Review of BTE's The Children: A Play by Lucy Kirkwood 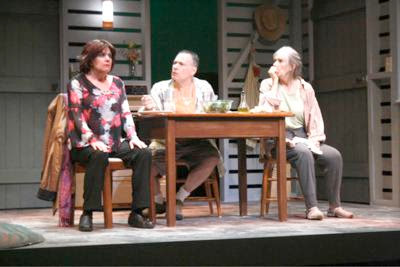 I went and saw Lucy Kirkwood’s play The Children, performed at the Bloomsburg Theatre
Ensemble. The entirety of the play took place at the home of Hazel (played by Elizabeth Dowd) and
Robin (played by James Goode). Their old friend, Rose (played by Laurie McCants) came for a visit after several years. The three are retired nuclear scientists who are experiencing the repercussions of their past mistakes, and seeing the effect of the current generation, due to a nuclear meltdown that took. place before the play began.

Some props they used were glasses, plates, silverware, table, chairs, an exercise mat, cigarettes, and the list goes on. The lighting was constant throughout most of the play, but they did add two extra lamps near the middle of the play, to showcase the changing of the time of day. A few times the actors went to the edge of the interior of the house (near the laundry hanging outside), especially during the more revealing scenes. One scene was when Rose and Robin talk about their past relationship. They moved furniture around when they needed more space for the dancing scene and moved it again when Hazel decided to pack a bag for the trip to the plant.

The overall feel of the house was a suburban household, nothing special, just plain colors and
well lived in throughout the years. My favorite part of the whole design were the props that were utilized. It is amazing to see how the same play can be different, just by watching the actors interact
with the materials provided to them in the space they are in.
at January 27, 2020