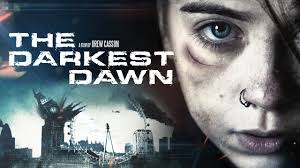 The Darkest Dawn followed a 16 year old named Chloe during an alien apocolypse. The shots were done "Blair Witxh" style, where the footage came from her video camera given to her the day before the apocolypse happened. Some shots made me feel wheezy with the sheer amount of movement. The graphics, especially the explosions and alien possessions, were fantastic. The plot seemed fairly sound as to how people might interact during an apocalyptic event. I would re-watch this film in a heartbeat.
at March 16, 2020